It’s time to teach the filly Puck a new behaviour when ridden.

Puck is used to take off and run as soon as the rider takes the reins. She won’t give to the bit and has a hard time standing still and wait or rest.

To teach her how to give to the bit I start by training her to stop and back up – all in one step. At first I’ll reward her as soon as she understands to step backwards when the rider is pulling the reins. When she’s got that, I will ask her for a more proper back-up and I also want her to be soft in the hands of the rider. In the beginning it’s pretty hard for a horse like Puck, who is used to put her nose up and move forwards when the rider is pulling the reins.

I also train her by letting her trot around on a loose rein in the roundpen. When she speeds up, I tell the rider to lead her in to a smaller circle without shortening the reins. As soon as she slows down and get soft in the inside, I let her out straight again. After a while she will get the idea that it’s a lot easier to trot calmly and balanced instead of trying to run away. Then it’s time to do same work in the canter – the goal of today is to keep cantering softly without speeding up. 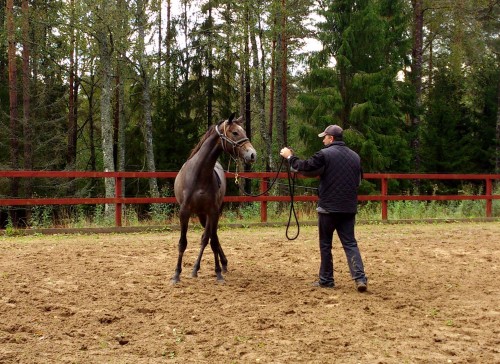